Full Name
Kelly Hughes
Job Title
Senior Manager Cyber Threat Intelligence & Incident Response
Company
Dignity Health
Speaker Bio
Kelly Hughes is lifelong technology student and passionate advocate for cybersecurity. A former state agency CIO, he currently serves as a Senior Cybersecurity Manager for a major Healthcare system with nearly $28B in Revenue and over 150,000 employees. His focus is on the operationalization of cybersecurity, helping to instill and grow a culture of cybersecurity excellence from the loading dock to the boardroom.

Prior to his move to healthcare, he retired from the Air Force where he served as a senior cybersecurity advisor with the U.S. Air Force and Air National Guard in Washington D.C. He culminated his 30 year career serving as a full Colonel helping to shape national policy in cyberwarfare and cybersecuirty for the Department of Defense. He was chosen to lead a disruptive expansion of cybersecurity capabilities by 300% to meet an aggressive and unprecedented growth in force structure for the nation. He and his team were responsible for annual funding and training for all of the Air National Guard Cyber and Space forces, comprising a $2B portfolio and 9,000 airmen across all 54 states and territories.

His keen understanding of operations and time sensitive crisis management stemmed from over 1,700 hours flying nuclear command and control platforms and national reconnaissance aircraft in sensitive areas of the world. He amassed over 100 hours of combat time in the air and two additional tours on the ground in physical and cybersecurity operations centers. As cybersecurity began to grow in the Air Force, he turned his operational expertise to helping to forge the new cyber capabilities through national level exercise planning and worldwide cybersecurity operations.

He holds a degree in Computer Science as well as a certification as a Chief Information Officer from the National Defense University. Washington D.C. 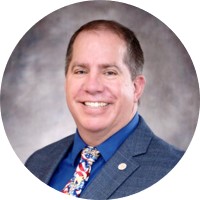