As President and CEO of Philadelphia-based Thomas Jefferson University and Jefferson Health since 2013, he has led one of the nation’s fastest growing academic health institutions based on his vision of re-imagining health care and higher education.

Under his leadership, Jefferson has expanded from three hospitals to 14, and from a health sciences university to a professional university with multiple campuses. Revenues have grown from $2.2 billion in 2013 to more than $5.1 billion in 2018. The new Jefferson focuses on managing the health of populations in southeastern Pennsylvania and southern New Jersey. Jefferson has the largest faculty-based tele-health network in the country, and an outpatient footprint that is among the most technologically advanced in the region. It includes the NCI-designated Sidney Kimmel Cancer Center.

His 2017 merger of Thomas Jefferson University with Philadelphia University created a pre-eminent professional university that includes top-20 programs in fashion, design and health professions, coupled with the first design-thinking curriculum in a medical school and the nation’s leading research on empathy.

His track record of success at creating and implementing programs that are shaping the future of health care earned him: Three years in a row among Modern Healthcare’s “100 Most Influential Individuals in Healthcare” as well as most influential physician executives; #21 among Fast Company’s 100 Most Creative People in Business in 2018; Ernst & Young’s Greater Philadelphia Entrepreneur of the Year in 2018; and Becker’s Hospital Review’s “100 Great Leaders in Healthcare.”

As an author, he has used science fiction to imagine an optimistic future for healthcare. His 2018 book is titled, Bless This Mess: A Picture Story of Healthcare in America – an account of how the USA was elected to the Intergalactic Council of Cool Health Systems by 2035. He is the author of 1999’s The Phantom Stethoscope, 2016’s We Can Fix Healthcare in America, and founder of the journal “Healthcare Transformation.”

In 2020, he will publish two books: Un-Healthcare: From Sick Care to Health Assurance, with Hemant Taneja and Kevin Maney. And Patient No Longer: Why Healthcare Must Deliver the Care Experience that Consumers Want and Expect, with Ryan Donohue.

His is co-author of an article in Vol 1, No 1, NEJM Catalyst: Innovations in Care Delivery, “Equipping the Workforce for Complex Care: How Jefferson University Trains Medical Students in Hotspotting” with Laurie Collins and Shoshana Sicks.

President Klasko has served as dean of two medical colleges, and leader of three academic health centers before becoming President and CEO at Jefferson. Through transformational gifts, he has renamed two of the nation’s medical colleges.

Through a unique four-pillar model – academic, clinical, innovation and philanthropy – Jefferson has attracted both venture capital and transformational gifts. Sidney and Caroline Kimmel donated $110 million to Jefferson in 2014, the largest gift in the University’s history. In 2019, the Kimmels donated $70 million for the Caroline Kimmel Biomedical Research Building for cancer research.

His own research has focused on physician leadership. After receiving his MBA from the Wharton School of Business of the University of Pennsylvania he developed new research about selecting and educating physicians to be leaders of change. His unique medical education program at USF, called SELECT (Scholarly Excellence, Leadership Education, Collaborative Training), was launched to choose and mentor medical students based on emotional intelligence and leadership potential.

He is married to Colleen Wyse, a fashion leader and founder of The Philadelphia Trunk Show, and has three children: Lynne, David and Jill.
Speaking At
The Next 24 Months in U.S. Healthcare Delivery 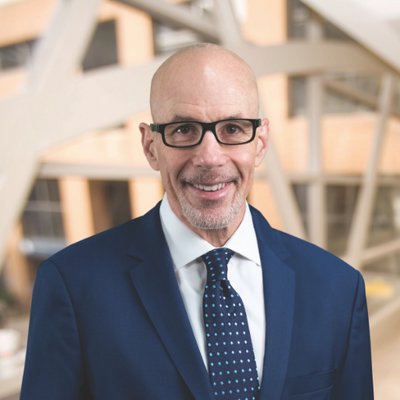