Sue previously served as the CIO for the University of Michigan Hospitals and Health Centers and prior to that as CIO for Brigham and Women’s Hospital in Boston. Previous experience includes leadership roles at Advocate Health Care in Chicago, Ernst and Young, and a software/outsourcing vendor.

She is active in CHIME and HIMSS, two leading healthcare IT organizations. Sue was named the CHIME-HIMSS John E. Gall, Jr. CIO of the Year in 2014.
Speaking At
The Chief Information Officer 2.0: What the Next Decade Holds 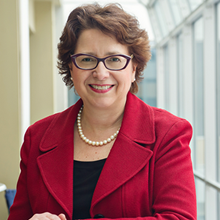